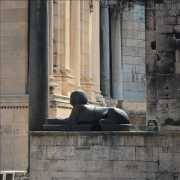 Because of its central position on the eastern coast of the Adriatic sea, the district of Split and Dalmatia has always had an extraordinary cultural and historical role. This entire rounded area consist of a wide hinterland through which flows the river Cetina, and of a coastal belt with an archipelago with many islands. Generous nature has garnished this rich and heterogeneous area with hidden bays, beaches, cliffs, karst, emerald groves, sea straits and vast hight seas. The islands of Brač, Hvar and Vis are wide, with beautiful landscapes and hierarchies of bigger and smaller settlements seem to be threaded on a string along the coast. The hinterland, to which even the breath of the
Mediterranean reaches, consists of a mountainous landscape with karst, wide fields and settlements, among which Sinj and Imotski have got urban characteristics. On the coast, the crossroads of continental and sea – ways, during the prehistoric and ancient era, the town of Salona has developed as the metropolis of the Roman province Dalmatia, whose role was taken over by Split in the early Middle Ages.Dubrovnik – the city of a unique political and cultural history (the Dubrovnik Republic, the Statute from 1272), of world-famous cultural heritage and beauty (inscribed on the List of World Heritage Sites by UNESCO) – is one of the most attractive and famous cities of the Mediterranean. Apart from its outstanding natural beauties and well-preserved cultural and historical heritage, Dubrovnik also offers high-quality visitor opportunities.
It is also the city of hotels, of high ecological standards and tourist programs, and is equally attractive in all seasons. Its geographical isolation is compensated by high traffic and communication standards – especially through air traffic and fast hydrofoil boats.